Per a Court announcement, on January 28, 2021 the Shanghai Intellectual Property Court ruled in favor of the plaintiff Casio Computer Co., Ltd.  against the defendants Tornado Company (旋风公司), Smael Company (斯麦尔公司), Weishi Company (威时公司), and Huaxin Products Factory (华鑫制品厂) in a design patent infringement case. The Court awarded 8.8 Million RMB ($1.369 million USD) in damages and expenses as well as an injunction, as is common in China. 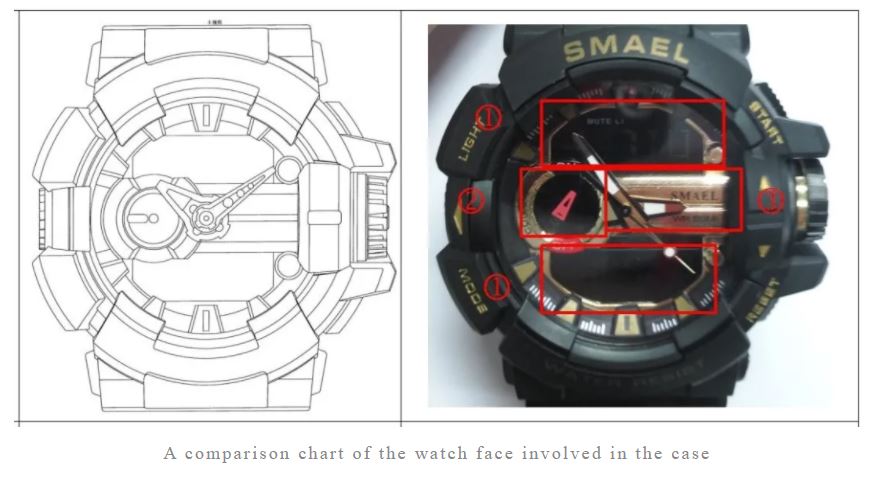 Casio alleged that since 2016, the defendants have infringed via sales of watch models 1436/1617/1545 under the brand SMAEL through physical  stores and on online. The appearance of these products is very similar to the products that Casio protected via design patents, and falls within the scope of protection of the patents in question. Tornado Company is the registrant of the SMAEL trademark, and Smael Company is the agent of the SMAEL watch brand. Weishi Company and Huaxin Products Factory are production plants, and the four defendants are all wholly-owned or invested in by natural person Peng. The four defendants produced, sold, and promised to sell infringing products in large quantities without Casio’s authorization, causing significant economic losses to Casio and constituting joint infringement.

In response, the defendants argued that the alleged infringing product was neither identical nor similar to the patent involved. Even if infringement is established, the four defendants have not committed joint infringement, and the amount of compensation requested by the plaintiff is excessive. In addition, seemingly confusing trademark law with patent law, the price of the alleged infringing product and the patented product involved are quite different, and the SMAEL trademark is completely different from the plaintiff’s trademark. The two products will not confuse ordinary consumers, nor will they cause economic losses to the plaintiff.

The Shanghai Intellectual Property Court held that after comparison, the overall visual effects of the three infringing product designs and the corresponding design patents were not substantially different, and the alleged infringing designs fell within the scope of protection of the patent rights involved.

To determine damages, the Court considered the following factors:

1. The sales scope of the alleged infringing products includes both domestic and international markets;
2. The four defendants have multiple sales shops and sales channels, and the scale of infringement is huge;
3. The patents involved in the case are of strong design and have a high contribution rate to product profits;
4. The defendant imitated the plaintiff’s patented product, and the subjective infringement was obviously malicious;
5. The court required the four defendants to provide financial account books related to the infringing products, but the four defendants refused to provide;
6. The plaintiff paid certain reasonable expenses to stop the infringement.

Accordingly, the defendants should pay 8.8 million RMB in damages.