The WIPO report released in Geneva in mid-March shows that nearly 30,000 international patent applications filed through the Patent Cooperation Treaty came from China in 2015, a 16.8-percent rise from a year earlier and allowing the country to hold onto its No 3 world ranking for the third consecutive year, after the United States and Japan.

Overall PCT filings worldwide increased 1.7 percent to 218,000 last year, a new record in yearly PCT applications, with the US standing as the top source for 38 consecutive years.

The news agency quoted Francis Gurry, director general of WIPO, as saying: "While the United States maintains its premier position, the geography of innovation continues to shift and to evolve, with Asia, and in particular Japan, China and the Republic of Korea, forming the predominant geographical cluster."

PCT filings doubled in Asia over the past decade and accounted for approximately 43 percent of the world's total.

In the report, Chinese companies showcased tremendous R&D strength, with four of them ranking among the top 20 PCT filers in the global business community.

Telecommunications giant Huawei topped the chart and ZTE was third. Both have ranked among the top three in the global PCT chart since 2013. Semiconductor developer and manufacturer BOE ranked 14th and Tencent, 20th.

In the report's university PCT rankings, Tsinghua University was eighth and Peking University, 11th. Both are headquartered in Beijing.

"PCT filings from China increased more than tenfold increase, and its domestic patent applications have ranked top in the world for five consecutive years, which reflects the country's increased IP creation and awareness, and its marked rise on the global innovation landscape," Chen said.

China is emerging as an originator of patents in 3D printing, nanotechnology and robotics, the report found.

Since 2015, Chinese applicants have contributed more than a quarter of first filings worldwide in 3D printing and robotics - the highest among all countries - and close to 15 percent of nanotechnology patent fillings worldwide, ranking third.

By 2010, Chinese applicants filed nearly as many 3D printing applications as Japanese and US applicants combined, according to WIPO data.

While robotics patents from China accounted for only 1 percent of the global total in 2000, that percentage rose to 25 percent in 2011.

Asia leads in annual global robotics sales, followed by Europe and North America. Within Asia, China has surpassed Japan to become the largest robot market, with South Korea the second biggest user of industrial robots in the region.

Compared to Japan, where universities account for less than 10 percent of total first filings, "China has the highest share of academic patenting, exceeding 70 percent for nanotechnology and 50 percent for robotics", according to the WIPO report.

China overtook Japan to become the second-largest R&D spender after the US in 2009. The emergence of China as an innovator has increased the diversity of the global innovation landscape, the report said.

In the sphere of international trademarks, China contributed more than 2,400 applications filed through the Madrid system in 2015 and ranked seventh worldwide, the highest mark since the country joined the system in 1989.

Chen said the ranking shows the increasing efforts from Chinese companies to expand overseas and their growing emphasis on development quality and efficiency.

"By building and promoting international images, they are sharpening an edge in overseas markets," he said.

Chinese companies need to enhance strength in obtaining and protecting their overseas IP rights, while moving up the global value chain, he noted.

The number of international trademarks owned by Chinese filers pales in comparison with a huge reservoir of domestic trademarks, he said.

Chen added that China, as a large manufacturing country, has yet to become a member of the Hague system in a bid to make better use of industrial designs for its industrial restructuring. 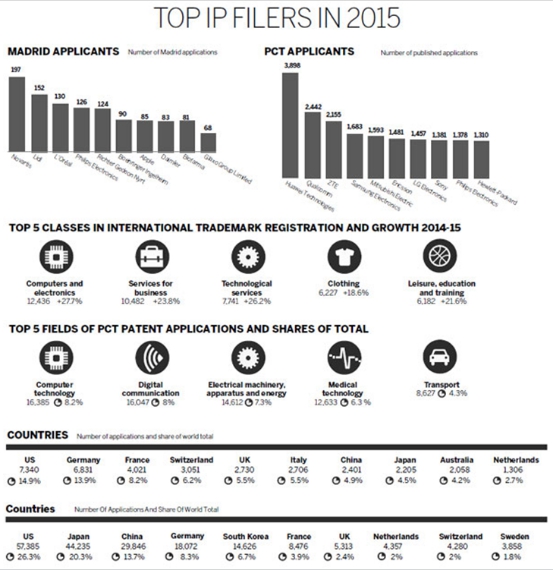